We here by, draw the attention of Nigerian Pipeline & Storage Company and good People of Okpella to the exposed Pipelines around the community like Iddo, Dangote Cement, Okpella entrance way and others..

Okpella TV, visited the exposed Pipeline in Iddo-Okpella, and behold, it is a “Death trap”.

According to the some residents, they said, the road was in good shape years back, and  they didn’t know the causes of the opening.

Looking at the condition of the road, it is just a result of  lack of drainages, leading to the  excavation by erosion, leaving the hydrocarbon pipelines exposed, which is not safe.

More so,the opening part has already formed a canal and about to divide the road into two, imagine the havoc it will cost the people of Iddo and the neighboring  communities.

The good people of Iddo and Okpella generally should not fold their arms until a terrible damage is caused, The Ministry incharge of the maintenance are suppose to ensure the pipes are buried properly. 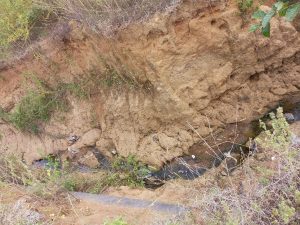