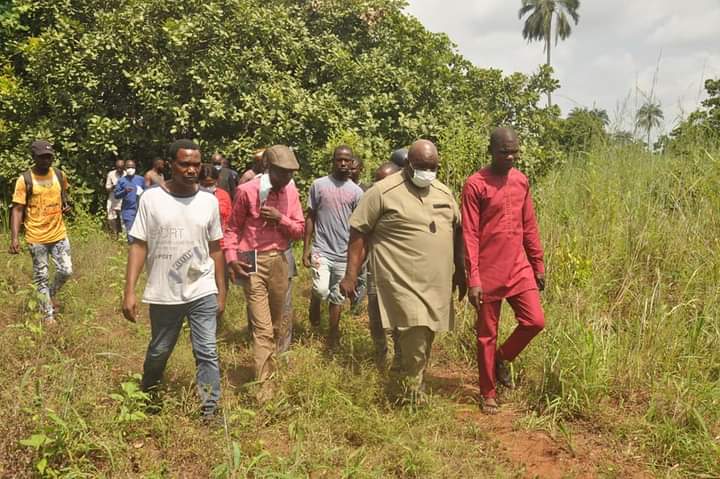 Aviation experts and other allied Engineers from the Federal Ministry of Aviation had today, inspected the proposed site for an airport in Edo North.

The Airport which has been conceptualized by His Excellency, Governor Godwin Obaseki during his ‘ thank you’ interactive session with Edo North people, who had supported his reelection, where he proposed to construct an Airport with its proposed location in Uzairue, Etsako West Local Government Area of Edo state received a nod.

Receiving the aviation team on Wednesday 4th of November, 2021 at the palace of Ogieneni of Uzairue, the Deputy Governor who was represented by his Chief of staff, Barr. Jimoh Ijegbai, due to his unavoidable absence to enable him attend the 3rd convocation ceremony of the Edo State University, Uzairue, disclosed that Edo State Government led by Governor Godwin Obaseki , would continue with the plan to construct Passenger airport in Edo North.

He explained that the airport project has lots of economic potentials and a positive multiplier effect in the overall development of the state in particular and the country in at large, as airports remains gateways for socioeconomic development of any nation.

He however noted that, what the state is yearning for is an airport that will support its massive agro development potentials.

According to him, ” the decision to continue with the airport project to be located in Edo North Senatorial District, was made by the state’s joint committee, which evaluated and placed priority on it due to the vast economic potential in the area”

He noted that a lot of verifiable paper work had commenced on the airport project, which will have the approval of the federal Ministry of Transportation and the Nigerian Civil Aviation Authority (NCAA), after today’s inspection and a consequent swift approval with a view to ensuring its immediate takeoff and completion.

Governor Godwin Obaseki administration is deliberate and methodical. The need to have an airport was made by State Exco and consequently evaluated the initiatives.

After a thorough evaluation, the choice of the Airport location in Jattu/Okpella, Uzairue community was unanimous, it complements the industrial and Agric/processing factories eco system in the area with access to good road network. Our decisions are always based on the economic value and benefits to our people.

He further assured the aviation team of the community’s support in the area, adding that the airport is expected to be given an approval in no distant time.

In his remarks, the Uzairue community development chairman, Alhaji Abdlhamed Saliu Egele, on behalf of the Ogieneni of Uzairue, said, ” the state Government’s efforts to build an airport in Edo North is timely and a very welcome development to the entire state in particular and Nigeria in general for the ease of transportation.

The spokesperson of the Aviation team who doubled as the Director of Aero, on a fact-finding mission, said, the environment of the proposed site is not undulating( levelled), though the team is here to gather raw data which would be deliberated on in its findings about the projects and come up with a good report, while noting that, there are no encumbrances or hazard such as River, high tension power or high mountains as physical observed.

Briefing newsmen after inspecting the site for the proposed Airport in Uzairue the Personal Assistant to the Deputy Governor, Dr. Felix Iyalomhe in his remarks said, ” the team is in the state to inspect the proposed airport project without any prejudice. According to him, ” Edo North could accommodate the airports due to the concentration of industries, the committee would come out with its report and submit such for approval to the Federal Ministry of Aviation.

It is verifiably on records that the 5 million direct jobs generated by the air transport industry worldwide, 4.3 million people are employed by the airlines and airports (aviation sector) globally, contributing around US$ 275 billion of GDP to the global economy. Air transport generates a total of 13.5 million jobs (direct, indirect and induced) and this is going to be well replicated in the proposed airport in Edo North when completed.

By facilitating tourism and trade, airports and air travel generate economic growth, provide jobs, increase revenues from taxes, and foster the conservation of protected are